Skip to content
May 24, 2018May 9, 2020 InventiveAfrica Digitalisation, Innovation, technology, Uncategorized

Did You Know mobile business cards are the future of networking in Africa?

The business card is one of the most compact business marketing tools in use today. Itits quietly in the back pack  our pocket or wallets where it is normally placed and may be regarded as a small insignificant piece of paper that is part of our interconnection and collaboration with people, but in reality  its  value is far more powerful and opens doors no one would.  As much as we have evolved into the world of digitalisation, but this old school strategy is still the best if you want to make real networking and real relationships-for it is  in engaging in real eye contact and actual conversations that meaningful relationships are built. As one of the best marketing tools, they ease making valuable business than typed e-mails which are impersonal.

These cards have a long history and an evolution which reflect their significance in our lives than we can anticipate. According to a 2011 article by Designer-daily, business cards began in the 17th century in Europe, where they were used for social interaction, which was the only way interactive form of communication. Centuries down the line, aristocrats and royalty began to appreciate them as well. Servants were the major messengers during the time who were sent to deliver cards to other servants of intended hosts. Ordinary people and the working class had to no access to them as they were regarded as having no class value and hence strictly used by those in higher powers to show respect and to politely make requisitions. Rules to their usage evolved as well, from how they were folded to serving as evidence of meeting attendance where visitors had to put them in trays of hosts. The more fancier and stylish they looked, the more noticeable they became which late a powerful base for future customs of exchanges in trade, Christmas and Valentine’s Day cards. 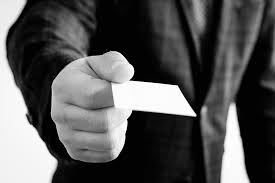 It is undeniable therefore after evolving from several different predecessors that ultimately merged into today’s familiar appearance, the business card still has a fascinating impact in peoples lives. Business cards used to be printed in black and white for many centuries. Technology has advanced and revived their appearance in recent times where the world is over crowded with advertising messages. Due to innovation playing a vital part, it is still easy to distinguish oneself from others. One problem has how ever been outstanding with business cards- keeping them organised. The small cards find their way almost every where: into handbags, jackets , desk drawers, little buckets by the computer and many other places. The trouble is, you can’t find the one you want when you need it. 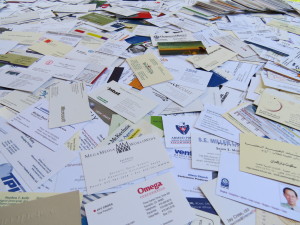 Two school students from Feza International school based in Dar es Salam Tanzania realised this problem like most of us but unlike some of us, they came up with a digital solution. They developed an e-business card app called VCARDIN which permits all business cards to be handled on a mobile phone. The initial drive that encouraged them to be so innovative was an encounter they came across with one of their teachers who was  struggling like many others to keep business cards organised. The app has amazing features which allows  users  to exchange their details between devices by simply “Swapping” finger on the phone while the app is on. Access to this feature gives room for historical background check of how, when and why people met, with additional information issues discussed inclusive. Not only does this feature save time but it also saves business people from loosing important clients. Through tapping the device together and selecting messages to transmit, the app gives users a bigger platform of sharing important  information, from  calendar events  to LinkedIn accounts. The app will be officially launched in November this year.

The impact of youth on the technology scene is undeniable. If you want to stay “young” and innovative, there is no other alternative but to immerse yourself in the emerging tools of the current and next generation which our blog  advocates for. Dar es Salaam is the fastest growing city in Africa, according to the African Development Bank (pdf). It has attracted a host of startup companies and NGOs but it has also become a fast field for emerging technology, such as drones and smartphone apps, as it expands and develops its urbanisation process. It should come as no surprise therefore for us to see more emerging technological solutions to some of its problems. We can draw examples  from the implementation what3words, an app that records GPS coordinates to nine square metres and simplifies them into a three-word combination. what3words is doing in transforming Tanzania’s  informal settlement is amazing. Many people without formal addresses did not have access to services and a legal identity but now they do. With more innovative ideas coming up, there is no doubt that many citizens are yet to continue enjoying the fruits technology.

Also, don’t forget to check out and like our Facebook page! For more interesting blogs about African Innovation, check out our homepage.