Did You Know African tech is competing on the world stage?

Earlier this month 11 African startups were named in the top 100 of 2016 by Nominet trust. African innovation is on the up, and it is becoming hard for the world to not taking notice of the excellence that is seeping out of Africa’s pours. We can’t feature all 11 startups in one post but we thought we would feature a couple today to keep you excited about African innovation over the weekend!

Education is always a big topic when it comes to African development. Countless summits and conferences focus on the topic, dragging in audiences, that have often paid a lot of money to attend to sit and talk over and over again about the same topics. Volunteers travel over to Africa, with their limited skills to work in schools and pretend to teach children. But, as we saw in 2016 technology is bringing real change to the continent. Mobile phones and the internet are bringing access to information like never before. This is where OneUni come in.

OneUni offers entire degree programs over a mobile phone. Students can access programs from regional universities through their smartphones and within the monthly fees the data is included. This means that as long as there is a connections students can work on their studies from anywhere. There are the usual lectures and readings, as in normal university, but the use of a smart phone makes the entire experience more interactive.

There is more and more demand for higher education in Africa. This style of teaching is becoming more and more accepted worldwide. To include the data charges within the fee is a clever motivation for students to pick up their mobile phones and get a degree.

Getting around Africa is an exciting experience, although after a few weeks taking public transport it can become a chore. Mini Buses trawl their routes for passengers, that cram into their seats until their stop comes along. These buses and taxis often take the same routes around the cities. In what seems like chaos, is actually order!

Digital Matatus want are using this order to be able to map the transport routes in Kenya. Using a specially developed app, users are able to map their routes, pinpointing the stops along the way. Even though there is order in the system, many of the bus stops are informal. Digital Matatus will formalise these and enable people to get to their locations more efficiently, using the data. It will also enable the government to be able to better plan transport infrastructure. They will be able to work out which roads are most frequently used, and therefore prioritise where should be maintained.

How many of you have given money to Charity. Billions of dollars reach Africa through foreign aid or charity donations every year. But, how is this money being used, and is it being used effectively. There is of course always the worry that money falls into the wrong hands, or is wasted on ridiculous expenses! Well, Follow the Money, is working directly against that.

With a team of analysts, journalist, lawyers and development consultants, Follow The Money track government spending and report on its effectiveness. This is an enormous step in the right direction for an industry that is based on trust. Many people give money, or send money into Africa, without thinking what will it be used for, and will it go where it is expected. With more information, people will be able to track their donations, as well as government spending. It should hold those delivering the development more accountable with the funds, which will hopefully lead to better delivery of development. 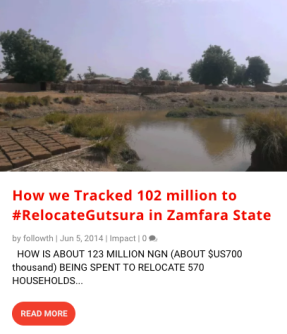 Every week, there are more innovations being launched in Africa. Many of them are very exciting and are created specifically for Africa, but have potential to spread to the rest of the world. If you would like to be a guest blogger, or have a comment please get in contact with us on Twitter @InventiveAfrica or email, and please also share the blog with your network on Twitter and Facebook.

2 thoughts on “Did You Know African tech is competing on the world stage?”