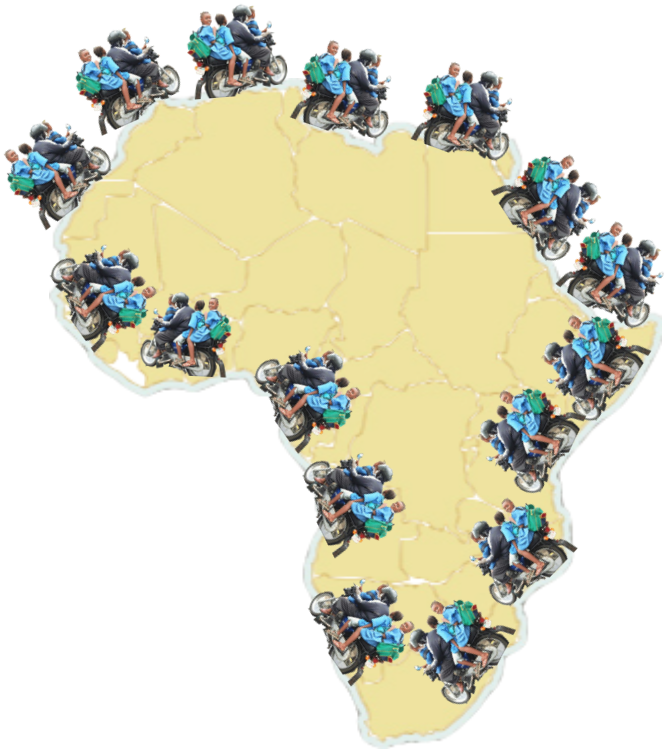 Did you know Africa’s transport system has been disrupted?

The public transport system in Africa is going through a transition. Uber has been the catalyst to change and their model is being copied by competitors across the continent. Over the last decade there have also been more and more motorcycle taxis (Okadas, Boda Boda, Phen-Phen, Zémidjans, Oléyia) zooming around cities, with their passenger or load balancing precariously on the back.

It was quite interesting to see the spread of these Okadas. They didn’t just pop up in the city, they started in a little border down, and slowly their usage spread down the main highway towards the city.

I often asked, how do these villagers afford their taxis and Okadas. Often drivers were driving cars or bikes that were owned by individuals that required them to pay a certain amount of money everyday. Drivers had to fight for passengers because everyday they would start off on a negative and they would only get money to feed themselves if they earn more than the daily payment rate. Job security was also a problem, because owners can take their vehicle back at any time. Many of the drivers came from backgrounds that would not normally be able to afford the big expense of a car or motorbike, but now they were had the ability to drive their own rides. Most of these men were not actually paying a big lump sum for their vehicle. In a scheme that they called ‘work and pay’, they were paying a weekly or monthly fee for the bike, which after 18 months to 2 years they would own. Much like a credit system, where you buy a TV, but in this case, they were able to empower themselves. The monthly fees were set at a point where the drivers were able to pay them as well as have money to live on.

Many of those leasing the bikes and cars out with this system had formerly used it themselves to get on the ladder. It turned these taxi drivers into entrepreneurs. As well as driving to make a living, they were buying and selling cars to their colleagues for extra income.

This system was usually run by individuals, but now there are companies that are offering the work and pay system, which formalises it, and makes it a more secure venture. One such company is Tugende, in Uganda. They estimate that drivers are able to buy their Okadas in 19 months if all the payments are on time. They also say that their monthly fees are only 15-20% over the usual renting rate, and therefore it shouldn’t be too much of a burden on the drivers. It is not just anyone that can apply to buy a bike. There is rigorous screening and vetting and most of those applying need to have been recommended by other drivers. They also estimate that when the driver takes over ownership of the motorcycle, following final payment, he or she will double their take home rates.

Uber has also had a big effect on the transport system in many places across the African continent, with competition popping up everywhere as a consequence. The next area to disrupt is dominated by private mini buses that also go by various names in different countries. They are Trotro’s in Ghana, Dala Dala in Tanzania or Matata in parts of East Africa. These mini buses travel throughout countries on set routes, picking up and dropping people at sometimes loosely defined bus stops for a fraction of the price of a taxi. Whether the Uber systems can be used (in the same way as it has been used for ambulances) or another innovation will shake up the often unsafe mini buses industry. Within cities speed limits are often ignored, and I have even experienced a passenger having to put his foot on the break, whist we sat on a hill, as the driver went to relieve himself and the hand break was faulty.

One company that is hoping to change the payment method in similar transport systems in South Africa is GoMetro, who are launching mobile ticketing and passenger information services for each service. This could be a game changer across the continent. Once you have been scrabbling around on the floor for your change, which has been accidentally dropped, you will realise that maybe cash shouldn’t be the payment method of choice. (Incidentally, this is also a good distraction technique for thieves!)

What would you like to see change in the African transport system? We have established that more trains are needed, but how can the current system be adapted to be safer and more efficient? Tweet us at @InventiveAfrica and please also share the blog on Twitter and Facebook.

5 thoughts on “Did you know Africa’s transport system has been disrupted?”